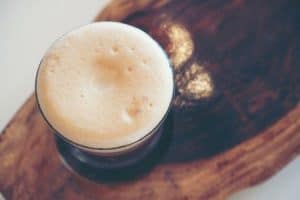 So have you decided to try the nitro cold brew? Good for you! Ever since nitro cold brew was first introduced, everyone is drawn to it by the name. The name of the drink sounds fashionably artisan and cool, doesn’t it? So what is this drink? You may have seen your barista pour some coffee from the countertop tap. This almost looks like they are poring some beer from the bar counter. But hey! Don’t worry, nitro cold brew is not any beer, it is modernized and a very special kind of cold brew coffee. So before you order what you’re unfamiliar with, let me tell you what this drink is all about and how it is gonna taste.

The name says it all! Simply put, nitro cold brew is basically cold-brewed coffee infused with fizzy nitrogen. Not only it is cool to watch, but also it is freaking delicious! You can taste the strong coffee flavor with cascading bubbles that are coming from the nitrogen. Nitro cold brew has a subtle sweet taste with a creamy, smooth, and rich body paired with a frothy-foamy top. Unlike traditional coffee, you’ll find this coffee less bitter and acidic. If this isn’t your definition of dream coffee, I don’t know what it is.

Many coffee + alcohol lovers have claimed that Nitro cold brew almost looks and tastes like Guinness beer, of course, minus the taste of alcohol. This sweet coffee drink has a very soft smooth finish, thanks to its light. The sweetness you get to taste while drinking this is derived from bright fruit flavors and chocolate notes. Sounds interesting, doesn’t it?

The texture is the key factor that individualizes this drink from others. The nitrogen in the coffee characterizes nitro cold brew. However, not all nitro cold brew is going to taste the same. In the end, it depends on how the cold brewing process was done. So like any coffee, you will notice variations in taste from cafe to cafe. The taste of the coffee will solely depend on the type of coffee beans, its roasting method, and of course, its grind.

How would you describe nitro cold brew?

However, the fizziness is slightly different than regular soft drinks (like coke) we find in the stores. The nitrogen bubbles of nitro cold brew are smaller in size that allows a denser,  more velvety, and suave, feel, which is totally the opposite of the light air-filled carbonated drinks.

Once you have your fun with the nitro bubbles you will taste the cold-brewed coffee that has a similar taste to your favorite draught beer. If you love your Guinness beer, you will love a glass of nitrogen-infused ultra-creamy, bubbly, frothy delight.

Do you not like your regular black coffee because of its bitter flavor? I have good news for you then! Nitro cold brews don’t have a strong bitterness. Rather it is pretty sweeter than your usual black coffee. These coffees are notably less bitter even without any addition of sweeteners.

As cream and milk ruin the texture of nitro cold brew, none of these are added to the drink. If the natural sweetness is not enough for you, you can always go to Starbucks for their sweeter variations of nitro cold brews. And let me tell you, they do have great options for the sweet tooths out there.

Nitro cold brews play a clean trick in your brain. This has something to do with its sweetness. The nitro cold brew coffee is much richer and smoother in texture than the regular cold brew. This happens because of the infusion of nitrogen which creates a naturally sweet flavor without any sweeteners or sugar. So how does that happen, ever wonder? When the cold brew gets in contact with nitrogen, millions of bubbles and frothy foam hit your tongue in so many ways. This prevents your tongue from tasting the acidic flavor and bitterness of cold brew and so nitro cold brew naturally tastes sweet.

Is nitro cold brew stronger than a regular cold brew?

How much caffeine is in the nitro cold brew?

Many baristas claim that nitro cold brew coffee has up to 30% more caffeine per ounce (which is 30 ml) compared to one ounce of regular coffee. However, the concentration of caffeine can be altered by altering the brewing methods and coffee ground preferences. When you order nitro cold brew, you will be served 16 oz of coffee. Typically, a 16 oz cold brew is most likely to contain 200 mg of caffeine, which is pretty high.

If you’re not sensitive to caffeine and love your coffee stronger, you cannot go wrong with some delicious nitro cold brews. Some baristas might dilute the cold brew to lower the caffeine concentration and make it more drinkable for those who find it too strong. So ask your barista before ordering such a strong drink.

There you go, friends. That’s my two cents on nitro cold brews. Indeed, these coffees are a bit pricey, but you’re paying those extra bucks for the unworldly experience and taste. And trust me, nitro cold brews will be worth every penny you spend. So enjoy this luxurious drink on a special day and make yourself happy, because why not!