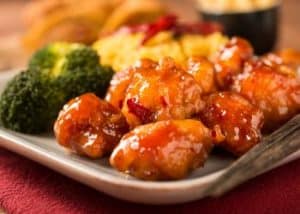 What do you think is the most loved Chinese food? I’d say it’s really hard to name a particular dish. But one dish we all know more or less is the General Tso’s chicken. Chinese cuisine is highly respected for its incredible dishes and how delicious they taste in our mouths. General Tso’s chicken is no exception. Like most chicken dishes this Chinese dish is also greatly hyped for its unique palatability. Are you planning to order a box soon? Then you better learn what to expect from this dish taste-wise. Let me break it down for you.

First thing first, General Tso’s chicken has a blended savory, sweet, and spicy flavor. You can taste the adequate sweetness and at the same time, plenty of savory spiceries. As soy sauce is one of the top ingredients for this dish, you can taste the umami notes as soon as it touches your tongue. It’s a satisfactory burst of all the flavors that makes you go “Mmmm..” with your eyes closed.

The dark chicken meats (cubed) are marinated with salt, pepper, and cornstarch with egg coating or flour batter and deep-fried in high heat. After that, a special sweet and spicy sauce is made to toss the chicken in that. When you bite into a piece, you can taste the rich taste of soy sauce, sugary sweetness, and a lot of spicinesses because of the dried red chili peppers (sometimes crushed black peppers too). Oftentimes this dish is served with some greens (i.e.- broccoli) for better appearance which I think is really cool. What say?

Did you know in some restaurants cook this dish with a slight amount of dry sherry or rice wine? To add a tad bit of tanginess, you may even taste some vinegar in there too. Honestly speaking, the authentic dish is hard to find in America. It is Westernized to a great extent. So if the dish doesn’t taste the same as you tasted on your trip to China. Sorry about that, mate!

It’s the sauce that makes each Chinese dish stand in the crowd. The same goes for General Tso’s chicken. Yes, as mentioned, the dish has a great level of sweetness in it that you can’t just miss. And a subtle hint of spice is right there in the sauce. You possibly cannot run out of spicy chili sauce for this dish. Each portion has more than enough sauce. You might even eat this spicy sauce as gravy and mix it with your sides or rice/ noodles. So, yeah, in a nutshell, General Tso’s chicken is spicy. But hey! Fear not! It won’t make your nose and eyes water. It’s not as deadly as the Flaming Hot Doritos.

I am extremely sorry to say, General Tso’s chicken is not really the ideal food if you’re on a mission to lose some weight before this summer. Why? Well, to start, the dish is loaded with a whopping 1500 calories and 88 grams of fat. On top of that, it is smothered with sugary sauce, and oh yes, the chicken is fried with cornstarch which is one of the raw ingredients for making candy.

Let’s not forget the unnecessary amount of sodium in this dish. Everything is way out of line with your recommended daily intake. So if you have a health condition or you’re strictly on a diet, one serving of this hard-to-resist dish will botch your weeks of hard work. Bey hey, if it sounds too discouraging, why don’t you have a cheat day and treat yourself. Don’t overeat this dish if you want to stay in the shape you are right now.

Is it clear to you now? Nothing too excessive, or fancy, but just enough to make your mouth salivate. Like most Chinese dishes, General Tso’s chicken does know how to play in your mouth. The perfect balance of “sweet and spice and everything nice”— that’s what I say about this dish every time I ‘devour it’. I just can’t get enough of it and I’m sure once you get hooked, you can’t let go either. So order some extra to enjoy the dish for later. And as always, Bon Appetit!