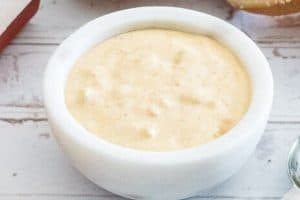 Think of the most mouth-watering fast food you can possibly imagine. Is it a big mac you’re thinking about? Perfect! Who doesn’t love the deliciousness a big mac offers! Moreover, it is one of the most sought-after burgers on McDonald’s menu because of its divine taste and burst of flavor in the mouth. So where does all the goodness of this burger comes from? It’s the big mac sauce! This might be a mystery for you if you haven’t had the chance to taste the famous big mac sauce. I’m here to give you a head up on what you can expect to taste.

Right off the box, the big mac sauce tastes like a special burger sauce that is creamy, salty, sweet, and a hint of subtle tang. The gentle sweetness and a slight kick of sourness make the big mac sauce as distinctive as you imagine it to be. The texture is wonderfully creamy and as for the taste, it is pretty similar to a nice-tasting mayonnaise. But this is no ordinary burger mayo, you can taste the richness in flavor every time you put some in your mouth.

It is hard to copy the big mac sauce. The complexity of its flavor makes it hard to recreate. Interestingly, the flavor combination of the big mac sauce cuts through the richness of a McDonald’s fatty burger, and by that, I mean the Big Mac, obviously. The reason this sauce is a perfect burger topping is that you can taste so many unknown and unique spices, herbs, and flavorings.

The interplay of flavorful spices and herbs makes the sauce extremely flavorsome and delicate. Hence, it is almost impossible to figure out where it ends, and where it begins. The rich creaminess is imported from the mayonnaise, while yellow mustard and mustard give it an angle of flavor and color. Thanks to the white wine vinegar for the tangy kick and onion and garlic powder condiments enrich the flavor of any food you pair the sauce with.

What is the big mac sauce made of?

As mentioned, the flavor of big mac sauce is complex and you can taste a lot of things, all at once. Generally, the Big Mac sauce is made from egg yolk, vegetable oil, sugar, salt, vinegar, and a range of spices, herbs, and flavorings. It is pretty hard to pinpoint what exactly makes the sauce stand in the crowd.

Many chefs and food scientists came up with a list of ingredients that are used to make this delicious sauce. Since it is a mayo-like sauce, you know that egg yolks and oil are in there. Additionally, water, spirit vinegar, salt, sugar, gherkin, modified maize starch, and allergen ingredients (some spices) are used to make the big mac sauce. Some argue that it is the rapeseed oil that is used particularly. Besides all the herbs and spices, particular natural flavorings are also added to the super popular big mac sauce.

If you have a really sharp sense of taste, you can detect the mustard in this sauce too. Besides the sugary sweetness, the glucose-fructose syrup is added to make the sauce a bit more restaurant-like. The creamy texture that you enjoy comes from the Xanthan Gum which is a thickener and the firmness of the sauce comes from the Calcium Chloride. To preserve the sauce for a long time, potassium sorbate is added that doesn’t contribute any flavor.

Is big mac sauce the same as burger sauce?

The sauce that you can taste with big mac is called big mac sauce. It is particularly used for this burger and you get to taste it only when you order a big mac. For other burgers, a different derivative of big mac sauce is used.

Is the big mac sauce good?

I have praised the big mac sauce, in and out. If it wasn’t that good, would I have bragged about it? Nuh-huh! With the unique combination of mayo, spices, dressings, and seasonings, the big mac sauce really has it all, and of course, just the right amount of twist!

Ever since McDonald’s dropped the big mac sauce in 1967, the recipe was improvised several times. Over the years, people have claimed that the taste is not the same as it was before. But that doesn’t mean the taste has gone bad, if only it got more delicious. So is the big mac sauce still good? Definitely! People’s love for the big mac is still the same. It’s the yummy sauce that elevates the overall taste of the burger. So next time you order a big mac, don’t forget to order a little extra! No doubt, you’ll love it!

Did you know America has the largest fast-food industry? McDonald’s single-handedly has contributed to that a lot. Thanks to their delicious foods and of course, the legendary big mac. The sauce really does bring the best out of the burger. So now that you know the taste, be ready to dive into the deliciousness of this sauce. Have a happy meal and Bon Appetit!