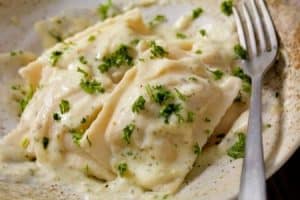 God bless Alfredo di Lelio for the invention of Alfredo sauce. Yes, the sauce is named after him. The Alfredo sauce got its recognition for being simple yet extremely delicious. You might have had Fettuccine Alfredo, which you can tell by the name is cooked with Alfredo sauce. So how a simple sauce can make a dish so scrumptious? What’s all the rave about? Just because a sauce has fewer ingredients, doesn’t mean it lacks flavor. Similarly, a sauce with more ingredients doesn’t mean it is more flavorful. So when you’re eating a dish that contains Alfredo sauce, what do you think it will taste like?

Alfredo is a very special sauce that is universally loved because of its inoffensive and unique flavors. If properly cooked, Alfredo sauce should be rich, thick, and creamy. The taste is basically peppery, salty, sweet, nutty, and garlic-, with hints of a few spices. The deliciousness comes from the predominant parmesan cheese and adding the garlic takes the sauce to a whole another level.

When you first put this creamy sauce in your mouth, you can taste the buttery heavy cream. You can tell just by eating half a spoon of Alfredo that the sauce has a roux base. That’s why you can reheat Alfredo sauce or cook it for a long time to make it thicker. Because Alfredo sauce is roux-based, it is smoother. clearer, and brighter the longer it is cooked.

You can smell the richness of butter, fresh heavy cream, garlic, and cheese as soon as an Alfredo sauce-based dish is served in front of you. There shouldn’t be any acidity or sourness in this sauce, Just a luxurious mouthful taste. Don’t worry if you can taste a lot of cheese, it’s just parmesan that has enriched the sauce’s overall flavor. The addition of salt of pepper gives the sauce a salty and mild spicy kick which is just perfect. If any other seasonings, such as nutmeg, peppercorns, lemon juice, cloves, parsley, etc. are often added to this sauce for some extra twist.

How would you describe Alfredo sauce?

Alfredo sauce has a special place in my heart. Even Fettuccine Alfredo is my go-to comfort food whenever I feel like I don’t want anything too savory or spicy. To best describe Alfredo sauce, I would say it is satisfying, comforting, and cheesy. I love it best when it is served on a cold winter day. A dish with Alfredo sauce in it adds the warmth that you need on such a chilly day.

Easy to cook, and easy to digest— Alfredo sauce is served best when it is hot. You can taste the richness in flavor and it will put a smile on your face immediately. So to enjoy the warm hug of Alfredo sauce, try other dishes like Alfredo chicken, Alfredo hot pie, Alfredo pizza, etc.

Does Alfredo sauce have a lot of cheese in it?

Traditionally, this sauce is made with heaps of parmesan cheese. So, yes, Alfredo sauce does contain a great amount of parmesan cheese. A single serve of Fettuccine Alfredo may have ½ lb of parmigiano reggiano cheese. And, that’s why you can taste the cheesiness in every spoon. However, if cheese is not your favorite thing in the world, Alfredo sauce might not be your best friend.

If you’re lactose intolerant, or just trying to avoid dairy, you can swap a few ingredients from the original traditional Alfred sauce, and add a non-dairy vegan version of this sauce. Traditional Alfredo sauce also contains egg yolk and flour for the roux base. You can alternate that with gluten-free flour, and instead of heavy cream and milk, opt for cashew cream or almond milk, or just full-fat canned coconut milk. The taste will be different but not unappetizing. Rather, you may find this vegan version much more delicious than the original one.

The general rule of thumb— if your Alfredo sauce tastes slightly sour or tangy, it means it has gone bad. Perfectly cooked Alfredo sauce should have a cheesy, creamy, and garlicky aroma. If you take a spoonful of the Alfredo sauce and it smells a bit odd, and by odd, I mean acidic and sour, the sauce is no longer alright to eat.

If you smell anything sour or foul, stop right there and do not proceed to eat it, not ever for a double-check. If you mistakenly eat sour-tasted bad Alfredo sauce, you might fall sick. Worst case scenario, this can lead to food poisoning or severe stomach aches and other problems.

But is it okay to taste anything sweet? Yes, that is completely okay! Dairy products already contain natural or artificial sweeteners. On top of that, some recipes suggest adding a little sugar to the Alfredo sauce. So despite adding a little pepper, you can taste the mild sweetness in this sauce which is okay. But sour? Not okay!

To sum up, Alfredo sauce is exquisite, fancy, and packed with richness. What people love about this sauce is that it is extremely versatile and in terms of taste, super yummy and fantastic. On a day, you don’t want anything too savory or spicy, Alfredo sauce-based food is just perfect to set the mood. So whether you’re feeling down, or just really craving some delicious comfort food, you cannot go wrong with Alfredo. And, as always, Bon Appetit!