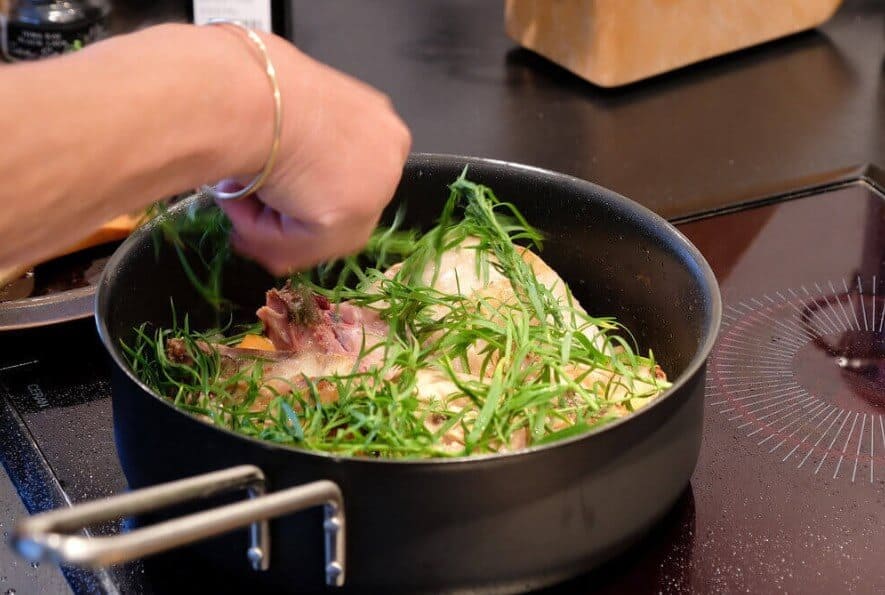 Tarragon is a herb dating back to the early Roman era. Its name “little dragon” came back from the Latin word dracunculus. According to mythology, it was a cure for bug bites and bee stings. People also use it for poor digestion and sleep disorders.

Tarragon has a very distinctive licorice flavor. It’s a must for most French dishes. If you are running out of it or can not find it near you, don’t panic. We have some great substitutes for you.

As you might know,  the dried and fresh tarragon both have various tastes and uses. And you can not use one for another. So, without further ado, let’s move on to the tarragon substitutes.

If your recipe requires fresh tarragon substitutes, we’ve covered it for you. The taste will remain constant if you follow our directions.

It is a spring herb and looks quite like parsley. It has a similar flavor to tarragon and parsley. Its mild flavor is best used for salads, soups, and broth and mostly associated with the Bernaise sauce.

Fennel seed is a common herb. But the flavor is more potent than that of the tarragon. So, while using it as a substitute, only one pinch is enough for one tablespoon of tarragon.

It is the base ingredient for most white sauces.  Chefs also prefer it to garnish various dishes and giving pork chops an elegant taste.

You can use it in mayonnaise as well. Fennel seeds mimic the flavors so well that you can’t even notice the difference here. You can also use it as a good substitute for dried tarragon.

This herb also belongs to the parsley family. The seeds and roots are edible, also having medical uses. It’s a must for flavoring gin and other liqueurs.

People also use angelica to flavor candies, desserts, and cake. It has a similar flavor, but its sweeter in terms of taste. While using as a substitute, consider a 1:1 ratio. Consider growing it in your home as its a bit hard to find.

Basil leaf is a prevalent herb and used in many dishes. So if you can’t find tarragon, it can be a good substitute.

There are various types of this herb, including holy lemon basil, sweet basil, and holy basil. It fits in with the flavors of the chicken, sauce, and cheese, and you can also use it in baking.

The scent of basil is very identical to tarragon but a little mild. You can use two tablespoons for each one tablespoon of tarragon as a substitute. I would recommend using the fresh ones as they have a more potent aroma than the dried ones.

Aniseed or anise has a flavor unification of flannel and tarragon. Having the same licorice essence, it works as an excellent alternative to tarragon. You can use it for the seasoning of appetizers, beverages, and sweets. You can also use ground anise with fish, soups, and sauces.

Just begin with a tiny amount of anise first. Then increase the amount gradually as it has a much dominant flavor.

Thyme is quite similar to basil. The Romans used thyme’s aroma to flavor cheese, beverages, and also purifying rooms. People also believed that it could keep nightmares away and offer courage. Moreover, it tastes magnificent!

Though the flavor is slightly different from tarragon, it can be a good substitute in bread recipes. Thyme leaves come in fresh and dried forms. You can easily find them almost in every grocery store.

It is a mixture of French and Western herbs. The premium mixture is considered a good substitute for tarragon, which gives the dish an elegant taste. Fine herbs are ideal for seafood, chicken, and sauces. You can use it at the same amount as tarragon.

You may think to substitute dried tarragon for the fresh ones. It’s always nice to experiment. But I would not recommend it. Fresh and dried ones have very different tastes and essence. You might not get satisfactory results.

Chervil and fennel both contain tarragon in the dry mix. But it is not as loud as that of the tarragon. Most french dishes need tarragon as a must. So you have to pay a bit of attention to what you have been using.

As I have said earlier, chervil has a mild essence, and fennel has a potent flavor. So, if mixed at the perfect ratio, it can be an excellent tarragon substitute. You can use them at 6:4 or 8:2 ratio. Experiment a little you might get what you want.

As I said earlier, dried tarragon has a very different taste and aroma compared to the fresh ones. So, here are some substitutes for dried tarragon in case you are in need

The dried tarragon has a different smell than that of the fresh ones. Marjoram can mask it quite well. Furthermore, you can add some basil leaves with marjoram to get the best out of it. You can use it on dressings, soups, and sauces.

Do you use tarragon to make your stuffing? In that case, you can simply use marjoram instead without any hesitation.

Dill is an annual herb belonging to the celery family having skinny, slender leaves.  Not to mention it substitutes tarragon nicely due to its taste. Except it lacks the licorice flavor. It is more of a bitter style.

It goes splendidly with meat and fish. I would recommend you to mix dill with lemon and use it during marination as well. For the most part, it works best with fish recipes.

Tarragon vinegar is nothing but vinegar infused with tarragon. Probably, it is made by regular vinegar as a base. But in my observation, white wine and champagne vinegar work best. You can make your tarragon vinegar with these simple steps.

Generally speaking, many herbs can substitute tarragon. But, you have to know which to use at what ratio. Some might need a pinch, while others might need a teaspoon or two. If you’re new to using tarragon, you can always experiment. I hope the herbs I have mentioned will be of help.

Scroll back to top